You might remember a blog post and videos about me working with Harley Mead on a song of mine.  Harley and I had planned to do more work on the song and the instrumental accompaniment.

We were not able to do this work.

Harley was the first real musician to believe in me and to work with me on a song.  I miss Harley as do all his friends.

I think the best way to remember him is through his music.

Here is a recording of Harley singing the melody when we started working.  (The lyrics are written below.)

I have been able to continue work on the song with Adam, who is very good on using digital effects.  Adam watched and listened to Harley's and my ideas on the videos.  He has been true to our vision and I think he has done a great job.

I hope that you like it, and that Harley would approve.

Running through the city with a plan on my mind.
It’s been far too long since I’ve seen my kind.
The business man is singing, the city is strained
at the pounding of the rhythm from my feet through the drains.

(Chorus)
Speed is my friend
She is my friend.
I’ll love you to the end my darling friend.

Lightning speed is the thought in my mind
When my body moves it keeps the thinking aligned.
Feeling equilibrium’s the thing that I need
and it all comes down to that yearning for speed.

Running to the sun are you nearly behind
as the yelling in the background drives me totally blind
to the people on the sidewalk and the traffic on the street
but the speed I’m feeling in me helps me keeping the beat.

Don’t let me don’t let me scream the world down
as the lack of outer speed makes my inner world drown
in the buzzing and the tension that is filling my veins
gotta break it and release before they call me insane.

Got to feel the water and the feeling of pain
the only things I feel that tell me I’m here again
Sort of bouncing back to action onto the side of the street
I”ve got to get my body back from pounding my feet.

Working with Adam on a song.

I want to tell you a bit about Adam and how it is working with him.

Adam is studying music at university.  He is about my age and quite cool in his own way.  I find it easy to talk to him and that he is ready to try anything on his synthesizer.

We have spent a lot of time trying things on my "Minute's Silence" song.

This treatment of "Minute's Silence" resulted from discussions and trial and error.  The version has french horns playing the melody and tubas the bass.  This gives the music the sense of being an anthem.

The following video shows Adam and I working on the arrangement.  Other videos can be seen here and here.

I hope you like it, but should tell you that we just used a piano and Dad's voice for my AGOSCI presentation.  That version can be seen at around 14.40 of the video posted in my last post.
Posted by The True Ben Kingston at 22:59 No comments:

Last week AGOSCI had its biennial conference here in Brisbane.  I was selected to give a short presentation about how I have learnt to write music to go with my songs.

Dad and I spent a lot of time thinking about what to put into my presentation.  Most of the words are mine and I approved those that aren't.  Naturally all the lyrics are mine.

Here is a video mum took of my presentation.

Everyone clapped for a very long time and many people came up to talk to me afterwards.

AGOSCI was great because there were so many AAC users there. 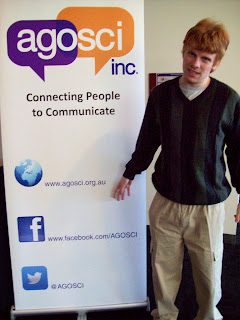 Posted by The True Ben Kingston at 15:03 No comments: 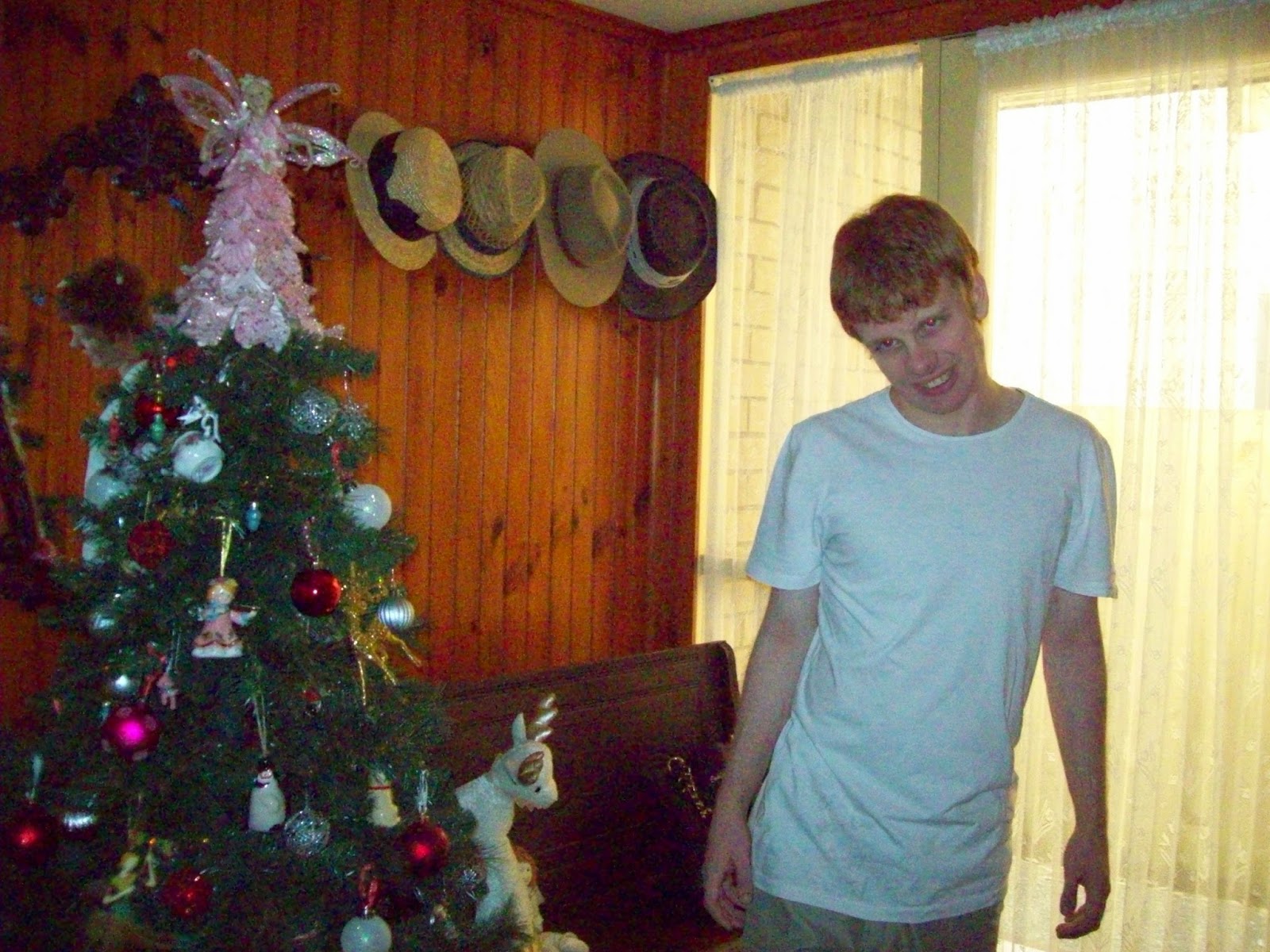 I'm anxious in anticipation,
The time is drawing near.
The lights and bells are out
and people in good cheer.

What will Santa bring?
Will it be presents or things that
consume me for the next year
until again I sing.

The shops are all crazy
hustling customers about,
dollars signs in their eyes
to blow our pockets out.

The carols are playing
in my mind and my heart,
but nothing compares to family
who are with me from the start.

So have a cup of good cheer.
Stay safe with family and friends.
Posted by The True Ben Kingston at 02:25 No comments:

I have told you before about the Dorothea Mackellar award.  I won it for a poem about the music in my head.  This was the first thing that showed me I could write things that people thought had meaning.

The award was presented to me by Chloe Charody, who is an Australian composer.  On her blog she said:  "If only I could hear the music that was in his head - I would score it out for him and try to make music become his friend instead of his tormentor".

I had the Lightwriter for the words, but no way to write down the music.

That was a long time ago and I have learned a lot since then.  Since I wrote that poem I have worked with some wonderful people: Jane and Bec, Matt, Jono and Steve, and Harley.

Belinda McNamara, who is my music therapist, helped me to take the music from my head and put it on paper.  My work with Nancy had made it possible for me to play the notes on the piano to match the music in my head.  Belinda could then write them down on a music staff.

The first song I worked on was "A Minute's Silence".  I wrote the lyrics for this song in 2012.

The following video shows how this worked.  It is a different song called "Young" and one day I will finish it for you.  Belinda can hear me play a note and tell which one it is.  Mum and Dad cannot do this so the process is a lot slower as this bit of video shows.  It also explains why I need to learn to write my music direct onto the computer.


After I had written the notes I chose crotchets, quavers or other notes from a choice board so it ended up sounding like this:


I wrote the music for "Minute's Silence" before the music for "Young".  That first time, after I had written the notes for the melody, we tried out some different note durations.  Belinda played options and I listened and chose the one I liked.  When we did the base Belinda told me what might fit with the melody and I made choices as I heard the options.  Then we could put the composition onto the computer and play the first version.  Here it is with the lyrics written in so you can follow along as you listen.

I am starting to learn with Adam McNamara, Belinda's brother, who is very good with IT based music programs.  At the moment we are working on the arrangement for "Minute's Silence".  Soon I hope to be writing music directly from a music keyboard to the computer, where I can then work on the arrangement to make my music come alive.  I will write more about this next stage in another post.
Posted by The True Ben Kingston at 17:07 1 comment:

I was recently at a meeting of people who communicate by typing.  This (below) was my response to a question about art and painting.

The pictures are of me working with Janet, who is the art teacher at The Tertiary Place (TTP).  We paint together on Thursday mornings and I look forward to these sessions every week. 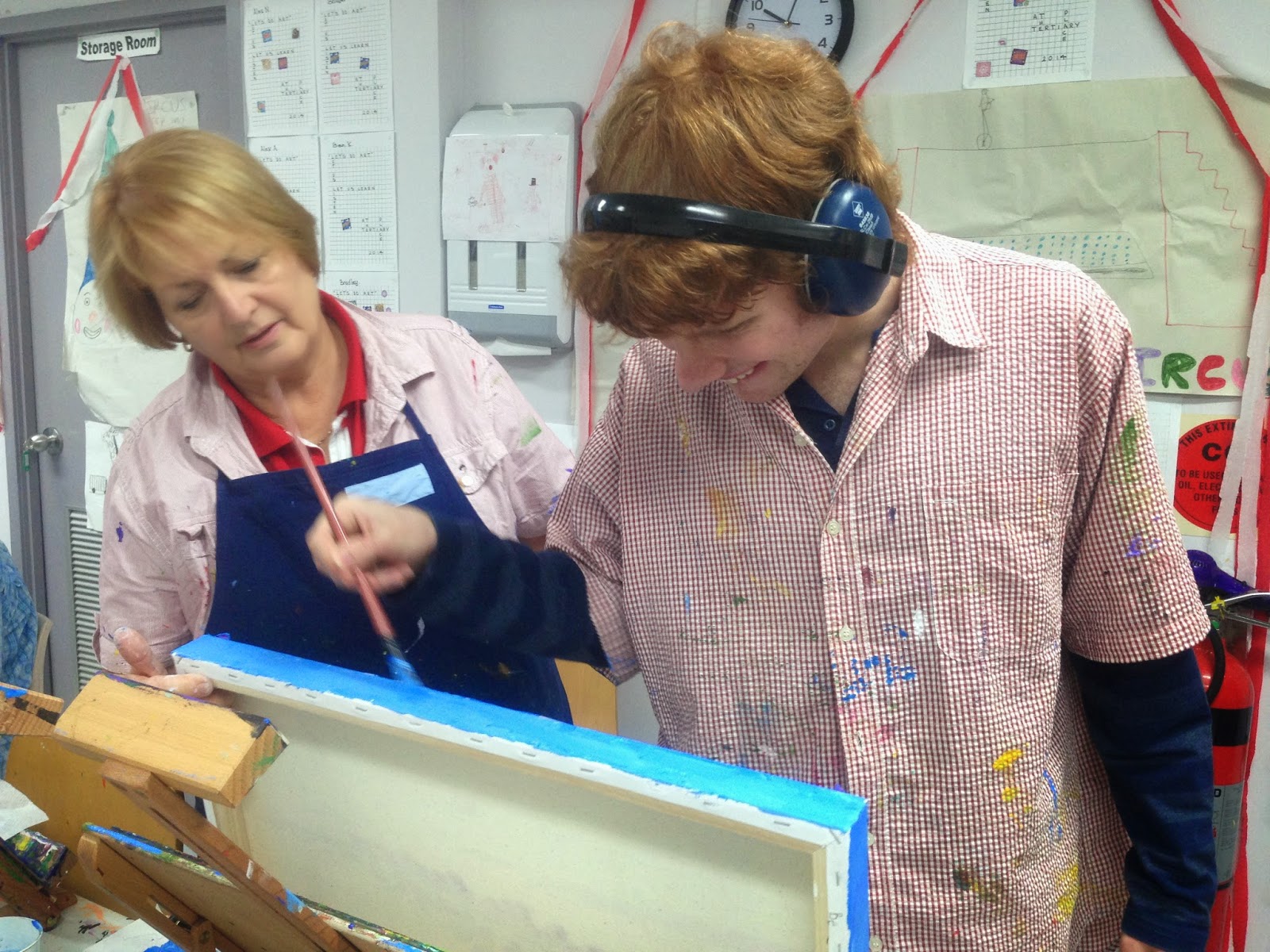 The gift of the paint is presented before me.

Then the picture in my mind's eye flashes up on the screen of my thoughts.

Reality becomes a mixture of light and shadows and hues which reverberate through my senses.

Ready to organise my body with each stroke and watch the canvas materialise into the projections bursting forth from the void in my head.  Some deep unknown mystery.

To brush and weave colours is a beautiful process unfolding. 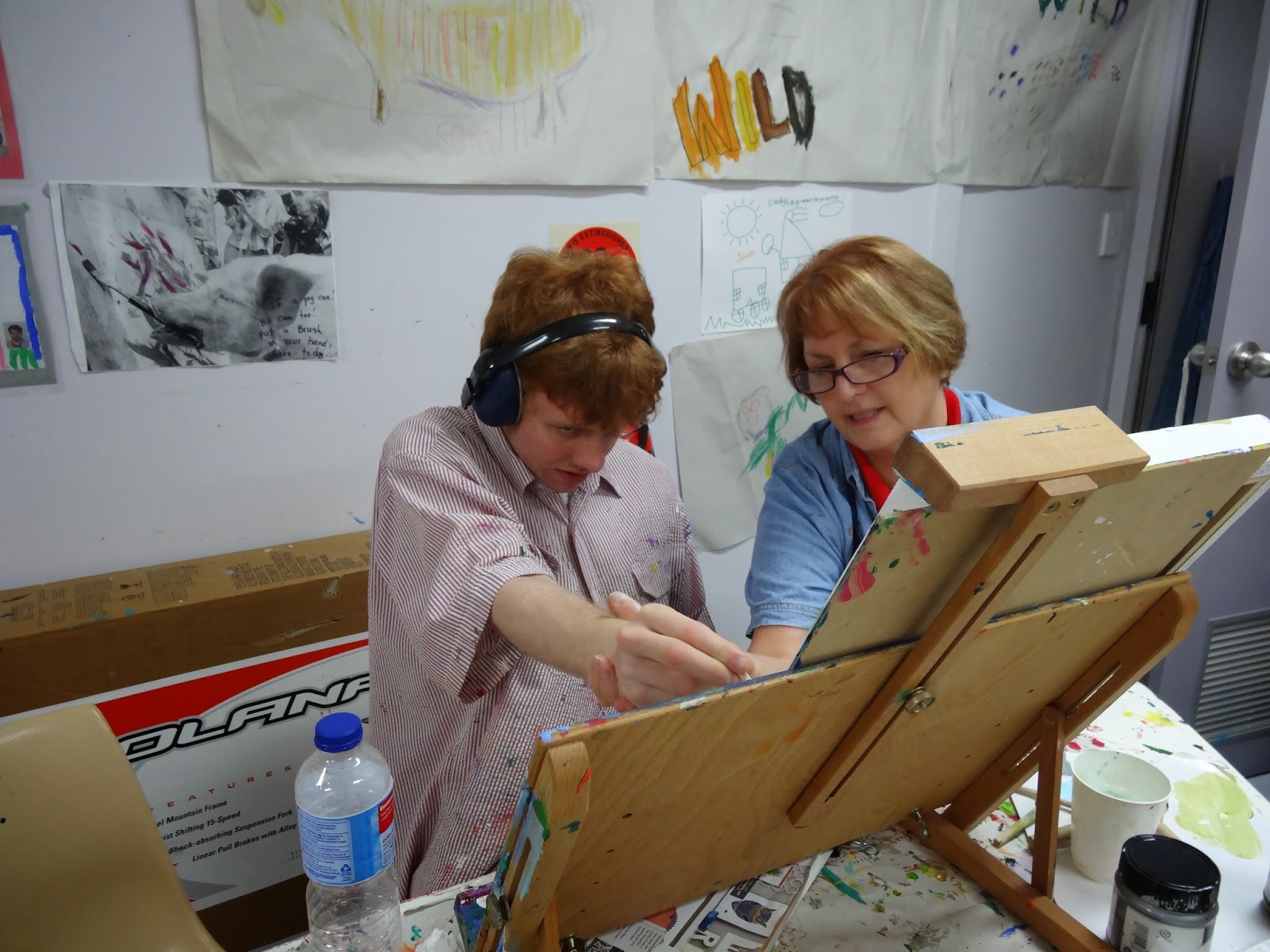 Posted by The True Ben Kingston at 21:55 No comments:

In my last blog there were two video clips and this time I have more video from the same session with Matt.

This video (transcript below) illustrates things that can distract me from good typing.  Things like rain and traffic noise and even having mum behind me with the camera.  I think that there are lots of people the same.


Transcript
Ben
Why can I face the camera and feel fine but feel uncomfortable when I can’t see the camera?

Matt
Hey – that last letter.  Great work because it’s easier finding it when you are in the rhythm, but you’d stopped the rhythm.  I came back here and you found the letter “a” to finish it off.  Well done.

Ben
Do you think I do need to be trying to type more like this?

Matt
You are trying to type like this, alright?  I think you are doing enough trying.  You’ve got to get that balance right between enough time trying to type faded, which is a little slow at the moment, and typing faster.  I think you’re getting a good balance, alright?

Now, you did a couple of times there some great stuff, in terms of you started off from around the hip before you actually got the rhythm.  The only thing you needed from me was the pull-back to the midline in terms of a starting point.

More feedback from Matt - (video here)
Ben, when you veer off to go towards the right side – which is something that I think I’ve noticed with you from day one, is that slight veering to the right – when I see that happening when I’ve got the hip support, that’s when I grab your hand and bring it back and place it at that midline mark.  It’s like that re-setting, which is something that I get the impression you’ve done from a very early age – because one, you can feel it and two, because I know Jane [Jane Remington-Gurney, who first taught Ben to use Facilitated Communication].

Usually when starting off fading what I’ll do is I’ll fade back the support towards the end of the word.  So the person has got the rhythm, and they would potentially have the motor plan there for some of the words.  So it’s easier at the end of the word because of them not having to initiate that motor plan, which I think is then connected with the rhythm – somehow – not being interrupted.  But what I’ve seen today is Ben, you’re having many interuptions to that rhythm, but you’re managing to get it back up and running and initiate the completion of the word you were half way through.
Posted by The True Ben Kingston at 07:08 No comments: 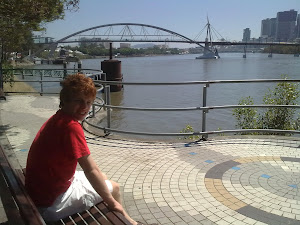